This morning the UK Butterfly Monitoring Scheme published results for surveys carried out in 2011. The UKBMS has run since 1976 and involves thousands of volunteers collecting data every week throughout the summer from more than 1000 sites across the UK.

﻿Data for the UKBMS is classified as official statistics which are subsequently used as biodiversity indicators for the whole of the UK and at a country level in England and Scotland. The data is crunched to produce indicators for habitat specialist and wider countryside specialists. In England there is more detailed work producing indicators which analyse differences in farmland and woodland habitats.

Annual trends are interesting, but monitoring of longer term changes is also very important in order to assess the state of UK butterfly populations. Dr Marc Botham stated in the press release accompanying the UKBMS 2011 release that, “Annual trends show us how strongly the day-to-day weather can affect butterfly populations in the short-term but the UKBMS dataset collected over 36 years reiterates the importance of long-term data in assessing the beyond these annual fluctuations.”


If you’re interested in the longer term changes in the state of UK butterflies take a look at the “The State of the UK’s Butterflies 2011” report, published late last year, which uses the UKBMS data collected over two decades to conclude that “Almost three-quarters of UK butterfly species have decreased in population during the last decade.”

Butterfly Conservation, our partners in the Uk Butterfly Monitoring Scheme have supplied a table of the top 10 species of 'winner's and 'losers' from the 2011 statistics. n.b. results should be interpreted with caution as some of the percentage values, such as the number for the Glanville Fritillary, are based on relatively small sample sizes. All the background details can be found in the pdf file containing the full statistics here. 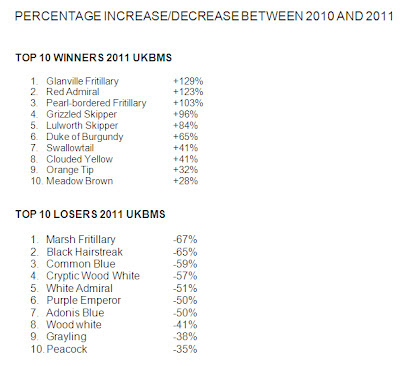