Staff and students from CEH hosted a stand at a science careers fair in Carlisle last month, during which budding young scientists were able to take on the Slimy Science Creature Challenge!


In total, a team of six staff and students from CEH’s Lancaster site created a stand for this year’s “Cumbria Big Bang”, which was held at Carlisle racecourse on 16 and 17 October 2012. The event was organised by Cumbria STEM (Science, Technology, Engineering and Mathematics) Ltd as a careers fair for 11-18 year old students from local schools and FE colleges, with the primary objective of helping to inspire and enthuse the next generation of young people about these subjects.
﻿
﻿ 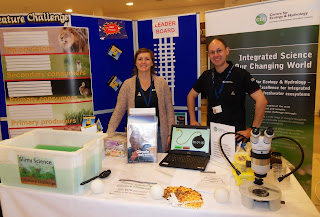 The main focus of our stand was a prize-based competition, which involved participants rolling up their sleeves and getting stuck into an ecology related scientific challenge. Fifty fridge magnets with images of organisms from different trophic levels lay hidden in a large container of green goo (made from gellibaff, a harmless powder which holds 400 times its own weight in water).
﻿﻿﻿ ﻿

Contestants had 60 seconds to delve into the slime to save as many creatures from the goo as possible.  In extra time, competitors had to correctly transfer the creatures to the right trophic level, i.e. decomposers, primary producers, secondary producers, secondary consumers and top predators. Frantic decision making often led the young scientists to build futuristic food chains, involving top predator pandas! 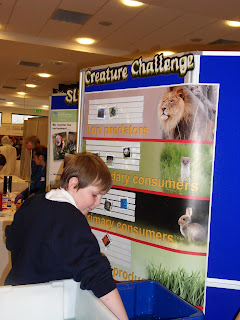 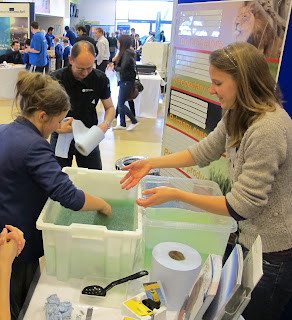 Our stand wasn't just about playing with slime. We took a microscope and showed the students the wide variety of soil animals that can be found in a compost heap such as a woodlouse, millipede, slug, various different worms and springtails. We also presented the kinds of jobs CEH does in Lancaster, including fieldwork, laboratory experiments, working with data, writing reports and presenting our science to the public. 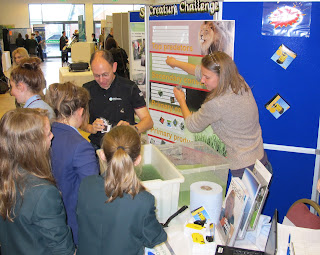 Everyone that took part was rewarded with a worm – the jelly variety! Those with the most correct answers made it onto our leader board, with four fantastic winners being awarded a pocket LED mini microscope each.

Our staff enjoyed the experience of meeting the students and hopefully the budding young scientists were encouraged too with what they learned about CEH and a career in science.
More photos from the event can be viewed on our Flickr photostream.
Written by Jacky Chaplow and Harriet Richardson.
Thanks also to the rest of the CEH team at the event: Elaine Potter, Judith Garforth, Andrew Sier and Claudia Moeckel.
Additional links
Cumbria STEM Ltd
CEH's Science Programmes
Posted by CEH News Team at Tuesday, November 06, 2012