Ladybirds break out of the Ivory tower

In March 2005 a launch event took place at the Natural History Museum in London. A new online biological survey was presented to a group of invited journalists. The survey aimed to persuade members of the British public to submit sightings of a newly arrived alien invader, the Harlequin ladybird, first spotted in the UK in September 2004.

The launch attracted lots of media attention with the BBC subsequently reporting the fears of the scientific team behind the survey that the Harlequin would “sweep aside many of the 46 species from the ladybird family (Coccinellidae) in Britain.”

Seven years later a new paper has been published in the scientific journal Diversity & Distributions examining whether that initial prediction has come to pass. Sadly it appears that for many of our widespread native ladybirds it has. Once again the BBC has reported the story, this time with the headline ‘Ladybird decline driven by 'invading' harlequin’.
﻿
﻿
The scientists who wrote the new paper found that declines in native ladybird species are occurring in Britain and also in Belgium and Switzerland, two other European countries where the Harlequin ladybird arrived in the 2000s. The stark conclusion was principally based on careful analysis of over 150,000 ladybird records submitted by members of the public. The researchers used generalized linear mixed-effects models (GLMMs) to assess the distribution trends of eight conspicuous and historically widespread and common species of ladybird within Belgium and Britain before and after the arrival of the Harlequin ladybird.  They also examined ladybird abundance records from all three countries.

The back story behind the new paper is a great example of how the European biological recording community have made full use of the power of the internet to improve the quantity and quality of the datasets they collect. By harnessing the combined efforts of thousands of members of the public, the ladybird ‘team’ has collated an amazing dataset tracking the impact of the most invasive ladybird on Earth, and one of the fastest spreading non-native species in Europe. The records have provided one of the first demonstrations of a strong link between the arrival of an invasive alien species and a decline in native biodiversity at a large spatial-scale.

The ‘ladybird’ scientists have used many methods to inspire members of the public to record and photograph ladybirds, talking to schools and local wildlife groups, as well as exhibiting at Science Festivals, and answering questions from journalists at all times of the day or night. I have a vivid memory of attempting to coordinate multiple broadcast interviews about ladybird ecology at 1am in the morning on the first day of the 2009 Royal Society Summer Show. 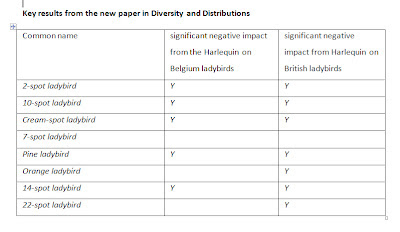 Recently Dr Helen Roy from the UK Ladybird Survey team, the lead author of the Diversity and Distributions paper, has been harnessing the power of twitter to engage a new group of recorders. You can follow her ladybird musings via @UKLadybirds

Without the public’s participation in the Harlequin Survey, launched that day in London, and the wider and longer running UK Ladybird Survey, as well as input to a similar online survey run in Belgium, the predicted impact of the Harlequin would have remained just that, a prediction.

Scientists are sometimes presumed to spend their lives in Ivory Towers having little interaction with members of the public. After working with members of the European ladybird research community for several years I’ve witnessed how they make the most of every opportunity to engage the wider world in their work, whilst maintaining a scientific output that is the envy of many other fields. Without their hard work, and that of thousands of volunteer recorders the worlds of ecological and conservation science would be much poorer.

Ladybirds (Coccinellidae) of Britain and Ireland - The Ladybird Atlas, published in 2011

Two of the paper authors recorded a programme in late 2011 for BBC Radio 4’s Living World series which looked at how ladybirds overwinter. Click here to listen again.

More details of the Diversity and Distributions paper