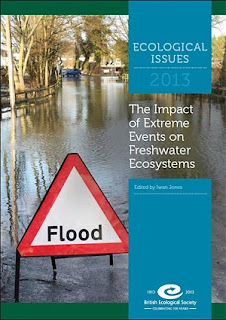 Dr Linda May and Dr Francois Edwards recently led the CEH input to a British Ecological Society Centenary report on the impact of extreme weather events on freshwater ecosystems. The report was launched at a special reception on Tuesday 25 June 2013 at Westminster.

Lake and river ecologists from across the Centre for Ecology & Hydrology were involved in contributing to the report, which aims to provide more information on the problems that floods, droughts, heatwaves etc present for freshwater systems, affecting water quality and quantity.

The launch event was attended by more than 100 people and included speeches from Andrew Miller MP, BES President Professor Georgina Mace and Huw Irranca-Davies MP, who officially relaunched the BES Ecological Issues series, which the new report has been published within.

Earlier in the day Dr Edwards helped run a workshop based on the report at the "Future Water 2013 Building resilience:  A sector fit for the future" meeting at the Royal Geographical Society.

To accompany the full report, a short 2-page summary and policy brief was also published.

Read the full report: The Impact of Extreme Events on Freshwater Ecosystems (7.40mb, PDF from the BES website)

More about the launch event can be read on the British Ecological Society blog.